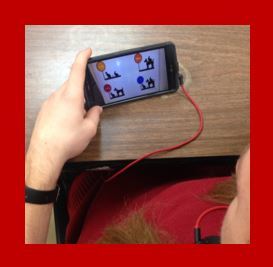 Even if they say they don’t like doing math, they secretly do. An Experiment you should try.

UPDATE AUGUST 2019:  The great people at Brilliant.org contacted me about this post and connected me to the great new puzzles they create every summer in the 100 Day Challenge and also to link to printouts.  Such great stuff.  Check out the links in the sentence before!  Thanks Brilliant!  (and follow them on twitter!)

ONE MORE THING:  I have received many, many emails asking for answers to the questions above and below.  I don’t give out answers.  In the words of Fawn Nguyen, “I don’t want to rob you of the joy of thinking.”

Last school year I had a student who at least once a week announced LOUDLY (and at times with swearing) that they hated math.  HATED IT!  The student would frequently shut down (head down, headphones on) or threaten to walk out.  Multiple times a week I was working to convince this student that they were a mathematician, that they could do anything we were doing in class.  Honestly, it felt like I was a therapist with this student all year.  I knew something for sure that this student knew in their innermost secret place – that they were totally a mathematician and despite all the bluster (more than almost any student in my 25 year career) this student loved solving problems and loved math.  This student was one of my favorite students last year.  I love the challenge of changing the pathways in students brains that cause them to react out of frustration.

Last year this student claimed to hate me.  This year this student seeks me out when they are frustrated.  (Don’t you love how much your students love you once you are not their current teacher!) Several weeks ago this student skipped their math class (out of frustration) can came to the math center where I was working.  I was not on my game that day and did not realize they were skipping until the end of the hour.  After talking through their frustration about not being able to do math, I told the student to chill out for the remaining 10 minutes so I could work with another student.  2 minutes later this is what I saw the student doing on their phone.

The student was solving a math puzzle I had posted in the hallway several days prior.  This student had no idea I had posted it.  This student claims to hate math, yet they took time out of their passing time to snap a picture of the puzzle so they could solve it later.  When I saw this I shouted, “HA!  I caught you.  You do like math.  Look, I told you to just chill and you are choosing to do math.”  This student smiled at me and just nodded in agreement.  Yes!  I love days like this.

Sometime at the beginning of February I decided to do a little experiment.  My gut told me that all of us love solving problems.  I wanted to see what would happen if I posted a math problem in the hallway.  Would anyone stop and try and solve it?

Since returning to the classroom 4 years ago I’ve become much more of a minimalist in my classroom.  If I am not referencing the things on the was regularly and/or no one is regularly looking at the things on my wall, then I don’t put it up there.  I have removed a bunch of ‘visual noise’ that use to clutter my walls.  If I was going to put something in the hallway, then I wanted people to look at it.  The walls of my school are littered with tons of announcements I am not sure anyone ever looks at.  I did not want this to be one of those things.

So I started with 2 basic rules for posting math puzzles in the hallway of my school.

Following those 2 rules I posted this puzzle – in color – on an 8.5×11 inch sheet of paper.  Someone I know posted this problem on Facebook – I think it may be from the Brilliant app -though I’m not sure. I did NOT include my name.  There were no prizes announced.  I have never told my classes about this.  I just posted it mid-day on a Tuesday.

Then I watched.  Nothing happened.  At least, I did not see many people looking at it.  I was a bit disappointed.

The next morning, I added this sign to the top of the problem.

Things changed immediately.  Every time I looked in the hall I saw single students or groups of students or even staff stopping and looking at the problem.  I saw students pointing and explaining.  At times I watch as students argued over the problem.  I heard students excitedly calling over other students so they could explain the solution.   They had no idea I was watching.  They were solving the problem out of the pure joy of solving things.  Lesson learned.  If you are going to post a puzzle – make sure you challenge others to solve it.

Student’s insisted on writing down the solution.  So I laminated the ‘Can you solve this puzzle?’ sign.  This stopped the writing.

Other teachers would excitedly tell me they caught students in their math classes who do not do well looking at the puzzle.

A couple of weeks later I changed the puzzle.  This time I used a puzzle I use in math class with my students.

Most people who solve this problem the first time (including a lot of math teachers) shout out ’16’,  When students are solving it I tell them after a minute that the answer is NOT 16.  They groan (I’ve just ruined what they thought for sure was the answer) and keep working on it.  I use this problem in class to have a discussion about the importance of watching the details in the problem.  My student teacher can be often heard in class reminding students to ‘watch for bananas and coconuts’ as they solve other problems.  When I posted this problem in the hallway I decided to add a post-it note to the puzzle.

Not even the power of Desmos could stop people from writing down the correct answer.  So I begged for them not to share the answer in my next post-it note.

That did not work either – people kept writing down correct & incorrect (15) solutions on the post-it note. .  Finally I laminated the statement.  Problem solved.

Almost everyday I catch people looking at, talking about the problems I post.  They do it more when they think no teachers are around.  I knew it.  At some level we all love doing math.  The structure of the classroom can take some of that joy away – even with the best teachers.

So what are my next steps?

As always, I love hearing from you!  Let me know what you think.  What have you done to encourage students to engage in mathematics outside of the things you do in class?

p.s.  After posting this blog, I was reminded that the inkling to do this started last summer during Twitter Math Camp when I introduced Dave Sabol to Jucy Lucy’s at an iconic Minneapolis Restaurant.  During our lunch he was telling me about posters he had used the prior year in the hallway’s of his school.  He was looking for a new idea and somehow the idea of ‘Which One Doesn’t Belong‘ problems came up.  I had wanted to do something similar for a while, but he made it happen at his school right at the start of the school year.   Check out Dave’s resources at his blog for WODB posters from his school.