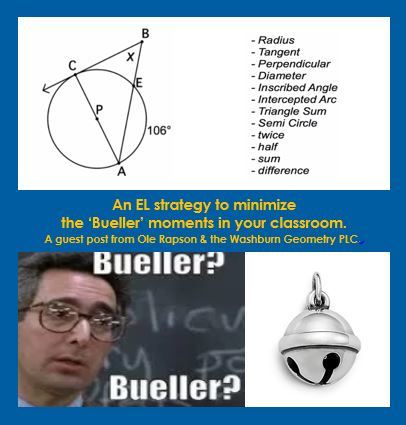 Note from Sara VDW:  Several times in the last year, Math teachers in my district have told me that they learned a lot about EL strategies for their classroom from Ole Rapson, a Math Specialist at Washburn High School in south Minneapolis.  I heard such great things from others about her (and also thought highly of her myself), so I asked her to write a guest post on my blog.  She, of course, credited others, specifically the team of math teachers at her school.  I recently had dinner with her and left with tons of ideas for my own classroom, including specific ideas of how to make my math lessons more culturally relevant (something most equity trainings fail to do).  Anyone that can inspire me and many other math teachers I know is somebody you all should listen to.  Without further ado, I’d like to introduce you to Ole Rapson and the Washburn Geometry teachers with a specific idea for your classroom.  This is not just great for the EL students in your classroom, it is great for everyone.

I believe that when I talk less and students talk more, they learn more, but that’s tough when I ask a question and I get a sea of faces … Bueller?  Bueller?

The Washburn High School geometry team has been experimenting with a strategy they’re calling Tally Talks, to try to get students to talk more in this high-vocabulary course called geometry.  We’ll talk through the basic strategy of Tally Talks.  But then, as it happens so beautifully in education, these three experienced and excellent teachers each have their own style and each have put their own twist on the Tally Talk.

The common denominator of all Tally Talks is the word bank.

For any problem you’re asking students to solve, pick 6-10 academic vocabulary words/phrases that you would use to explain the answer.  Give the problem and the vocabulary list to students.

Washburn’s geometry team mentioned that they saw real growth in the units that they did at two or three Tally Talks, but that if they only did one a unit, it wasn’t very useful.  So make sure to plan multiples, to build on these speaking and listening skills.

Here are some examples:

In the original version, students were paired.  The worksheet had two problems on it, labeled A and B.  Students were given some work time to solve their problem (only one!)

Then switch: student B explains their problem while student A tallies.

As you can imagine, there will be competition.  You can play the competition up, or down, depending on your style!

Tweak One: Say it Twice

In order that struggling students could hear two different explanations, Rich Sudo tried working in groups of three.  Like the original version, they only solved their problem, and they listened and tallied for their partners.  Student work might look like this:

You can see that both Marta (B) and Bruno (C) used the words leg, right triangle and square root, but only Bruno used ‘hypotenuse’ and no one talked about ‘rationalizing’ the denominator.

In a quiet first hour classroom, Cynthia Jones was still struggling to get students to speak, plus the problems were getting thornier.  So she turned to writing.  Students worked in pairs to solve problems and then write out the solution, again, with a word bank handy.  When done, they highlighted the words used and revised their work to ‘pump up’ the academic vocabulary if needed.  This individual method also saves a bit of class time in the moving of desks.

Rich Sudo tucked a jingle bell in his shirt pocket one day and rang it every time a student used a word from the word bank in his proximity.  Jingle-ling-a-ling!

If you’re adept at your whiteboard software, you might be able to create a ‘Ticker Tape’ of the words to be scrolling on the screen continuously.

This works great for a warm up or quick practice questions.

Pick one of these versions that seems right for your students and your style and try it out – try it out NOW, before the end of the school year.  And if it feels good, then commit – tell yourself you’ll do one a week next year.

A final note from Sara:  Thank you Ole and the Washburn team for sharing what your Geometry PLC has worked on to get students talking more in your classroom, specifically using academic vocabulary terms.  If you like this idea, look for a post I am working on in June with more EL ideas, including at least one more from Ole.