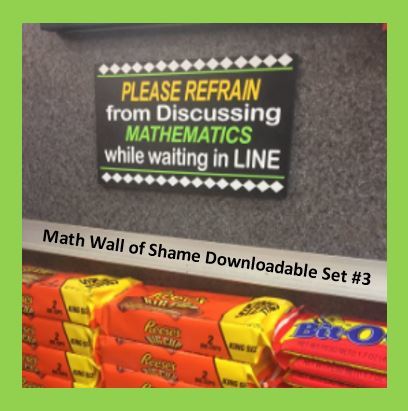 When I created my ‘Math Wall of Shame’ several years ago I never would have imagined that I would become the go to person for math fails.  Thank you to everyone who tagged me in a math fail this year.  When you do I add them to a word doc to share with you August 1st of the next year.  I am amazed that after over 150 math fails I was still able to collect another 93 of them.  Here are a few of my favorite from the last year.  (note: scroll to the bottom to download all 93 of the new ones.  I also added links to sets #1 and #2).

p.s.  There is at least one fail in this year’s set that I can’t remember what the fail is.  Also, I always include at least 1 pic that is not a math fail (usually it is something I’m annoyed with).  Can you find this years?

Will there be a Math Wall of Shame/#mathfail Pics #4?  Well that is up to you.  Send me what you find to [email protected] or tag me on Twitter @saravdwerf or use hashtags #mathfail or #mathwallofshame.  I look forward to seeing what you find.  If you tag me, I will collect and post August 1st, 2018.  Until then, enjoy this years finds.