In 2004 I left my first teaching job of 13 years at a high school to teach middle school (same district).  I was on a mission to learn how to address the math needs of my districts students well before they arrived to high school.  In staff development training I met some of our distracts wonderfully talented middle school math teachers, including one who I will call Mr Smith.  Mr Smith taught math at a school 2 miles north of mine & I immediately knew I could learn a lot from him.  We became friends.  4 years later he encouraged me to apply for our districts math lead position. Mr. Smith has had a significant impact in how I enact math lessons.  In this post I will tell you about what I learned from Mr. Smith.  In post 2, I will tell you how this has changed my own teaching by redesigning how I launch a math lesson.

During the time Mr. Smith and I became friends, there were two major initiatives in our district you should know about.  One, the professional development framework was out of the University of Pittsburgh’s Institute for Learning (IFL). All teachers in all subject areas received 4-7 days of intense content training using this framework each year.  Second, Vanderbilt University began a 5 year study (from 2007-12), MIST, under the direction of Paul Cobb, Kara Jackson, Tom Smith & others of middle school math teachers and their professional development.  Every math teacher in 10 of our schools had lessons video taped each year, they were interviewed multiple times, they took assessments on content and pedagogy.  Our districts leaders (principals, coaches and up to the Superintendent were interviewed).  All math professional development was video taped.

Mr. Smith and I were both part of Vanderbilt’s study.  Mr. Smith and I were also trained as professional development trainers through IFL.  In Vanderbilt’s study I was both a teacher in the study, for 2 years, and the last 3 years I was part of the study as a district leader providing professional development to math teachers.  We were both videotaped & interviewed a lot over the course of 5 years.

Mr. Smith is one of the best math teachers I know.  Seriously, he is amazing.  His classroom is one of the most visited by principals and coaches in my district.  This is not just my opinion.  My districts head of Research Evaluation & Assessment identified him as one of 6 math teachers consistently making the most growth with students on assessments.  He has won national math teaching awards. Vanderbilt uses videotapes of his classroom, with his permission, in their own PD with teachers.  Vanderbilt even wrote some articles for NCTM, in which they named him Mr. Smith.
One article, written by Kar

a Jackson and others out of Vanderbilt, for NCTM’s Middle School Math Journal that I want to highlight for you today is titled ‘Launching Complex Tasks.’.  In the article Jackson & others highlight 4 aspects of effectively launching a complex task so that students are able to engage in productively solving it. Here is a quick summary of their 4 findings (but read the article!)

“Some students may struggle when starting because they are unfamiliar with the context, or scenario, in which the task is grounded. It is therefore important that the teacher and students discuss any potentially unfamiliar features of the task.”

“Our analysis of instruction indicated that focusing solely on context is not enough.”

“In the effective launches that we identified, teachers did not simply talk to students about the key features of tasks but instead solicited input from students.”

“To maintain the cognitive demand, or mathematical rigor, of the task (Stein et al. 2000), avoid suggesting a particular solution method to students.”

Read the article!  In the article Jackson, Cobb and others do a great job describing each of
the 4 aspects above as Mr. Smith implements a launch for a 7th grade CMP Lesson – Dancing for dollars.  What I was impressed with most in the article is that Mr. Smith’s lauch was only 8 minutes in length (in a 1 hour class).

Because I personally know Mr. Smith and have seen him teach I want to tell you the story of how he launched another well known CMP lesson – not in the article – and how that impacted me as I redesigned my own lessons (this will be part 2 of my post).  Vanderbilt, with Mr. Smith’s permission gave me access to videos of Mr. Smith’s classroom to use in the PD I did with teachers in my own district.  In one lesson Mr. Smith launched a lesson from CMP’s 7th grade text ‘Moving Straight Ahead’ – the lesson, Walking to Win, is pictured below. 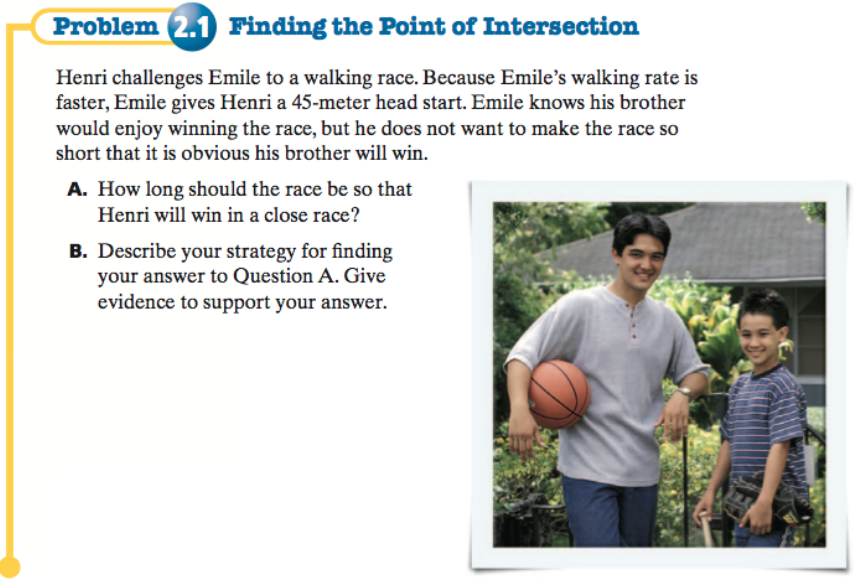 In lieu of the video, I will give you a quick description of the launch.

launch lasted less than 10 minutes.  Mr. Smith’s learning target – one he uses most of the year – was for students to ‘represent relationship with tables, equations, graphs, context and language (5 representations of a function).  Mr. Smith’s lesson was a textbook picture of lessons described in Mary Kay Stein & Margaret Schwan Smith’s book ‘5 Practices for Orchestrating Productive Mathematics Discussions’ which came out 3 years after Mr. Smith’s video.

One day at a PD I showed a group of young math teachers the first 10 minutes of this video.  Mr Smith was in the room as I did this.  I then asked the group to brainstorm what was effective about the launch.  Their responses were typical of other groups I had used this video with:

Later when participants were working on something else, Mr. Smith came over to me and said, “You know Sara.  The reason I used ‘race walking’ as a context for this problem is 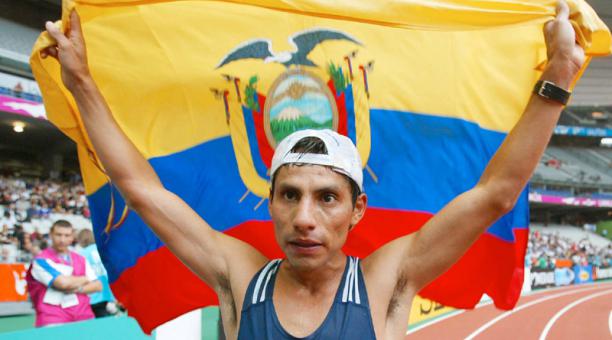 because most of my students are from Mexico.  I have only one student in my room who is from Equator and others assume he is Mexican or they pick on him because he is not Mexican.  I wanted to find a context that would give this student status in my classroom.  I wanted to promote his expertise in the room in a safe way”.   When Mr. Smith said this, I almost cried.  This is why Mr. Smith is so amazing.  Hes not only planed a quality launch that would discuss key contextual features & math ideas while developing a common language & maintaining the tasks cognitive demand – he was also working hard to find contexts that would honor what he knew about the backgrounds of his students.  His goal was to 1st build relationships with students and know them and their families/communities deeply.  This knowledge of his students backgrounds was equity in practice.  His planning of how he launched each lesson to maintain its cognitive demand is why his students are always so engaged in rich mathematical discourse.  His test results prove his students continually make growth.

I get asked all the time what textbook Mr. Smith uses.  Principals and other teachers think the secret to his success must be in the text book.  He does not use a textbook.  Many times I’ve been asked to get lessons from Mr. Smith so that others can use them (seriously, how great would it be if he had a blog).   He was very open and generous and would give us some of his favorite photos he used to build tasks around (he was noticing and wondering before it became an Ignite talk).   One day though he pulled me aside as his friend and said, “Sara, I would love to give everyone my lessons, but I don’t keep them.  I change them every year based on my students and what is happening in the news and their communities.  I just start every planning session with what do the standards say my students should be able to do and I build a context around it that honors my students”.   Wow.

I know most of us can not do what Mr. Smith does – build new math lessons every year.  Thank goodness there are some great text’s out there as well as all the rich material available from the #MTBoS community.  That said, no matter what complex tasks we select to use there are some lessons we can take from Mr. Smith and apply to our own planning and classrooms.  Here is my list of what I have learned from years of knowing him:

Kara Jackson and others continue to do PD using the learning from their research.  Here is

a power-point I found online Kara did entitled “Specifying Equity in Practice: Setting Up Complex Tasks”.  The word her her title that caught my attention was ‘equity’.  Here is what I know about Mr. Smith’s classroom.  95%+ of his students were poor and/or students of color – many, many immigrants.  You could walk into his room on any day and see 100% of them engaged in grade level math, rigorous task with a high level of group and class discourse.  The decisions Mr. Smith made in planning his lessons gave equitable access to every student to high level mathematics.  He changed their lives.  Mr. Smith & his classroom are ‘equity in practice’.

WHEW!  That is a lot of words.  In my next post-part 2…sometime in the next few days I will talk about how the lessons I’ve learned from Mr. Smith have played out in my own classroom.  I will show you how I’ve redesigned a lesson and talk about why I made these choices.  As a bonus I will connect it to the OLYMPICS – which I love and start next week.  The Olympics are great source for developing math tasks  More soon…..I’ll link here when I post.  If you have read this far, I admire you.  I hope you have a Mr. Smith in your life.